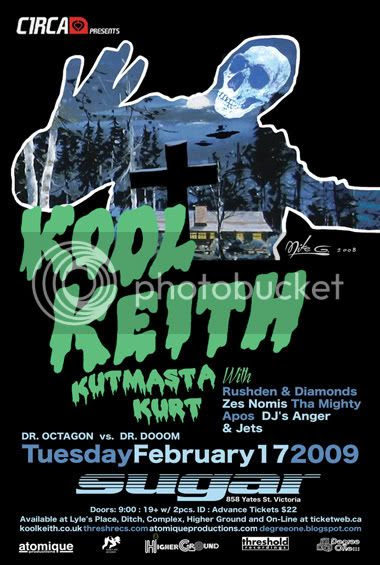 Whether as a founding member of the legendary Ultramagnetic MCs, or in the guises of his renegade rap personas that include Black Elvis, Poppa Large, Big Willie Smith, Dr. Octagon and Dr. Dooom, Keith has established himself as an innovative lyricist whose raps stretch the envelope to the limit while exciting and entertaining the listener.

Kool Keith first emerged as part of the legendary New York crew, the Ultramagnetic MCs. At a time when rap was slowly making the transition from B-Boy braggadocio to a more aggressive, politicized stance, the group quickly established themselves as lyrical innovators with such classics albums as Critical Beatdown, Funk Your Head Up, and the Four Horsemen. Kool Keith launched a solo career and through his various releases he explored his many sides, from the playful to the downright carnal, releasing such independent records as Kool Keith's Sex Style and Dr. Dooom's First Come, First Served.

In addition to his many rap outings, Keith proved he was not averse to cross-genre experimentation and even collaborated with the electronica outfit Hardkiss on "Abandon Ship" (Sharks & Mermaids mix) on the Astralwerks imprint; in fact, Kool Keith appears on the Prodigy album Fat Of The Land as the voice of "Smack My Bitch Up" and on the track "Diesel Power." On a recent commercial tip, Kool Keith appears as Dr. Ultra, the lead character in a series of nationally-broadcast television ads for Sprite. Looking back at his vast eclectic body of work, Keith says ..."I'm not about nostalgia, I'm not about looking back. If I made a hit, I moved on and never looked back.... the future is what I should be dwelling on right now."

"Get your tickets asap.... you know this show will Sell Out...