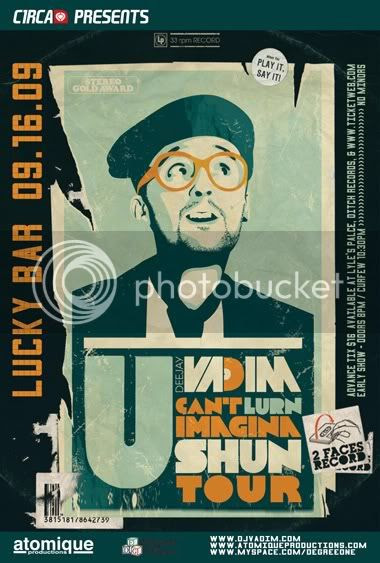 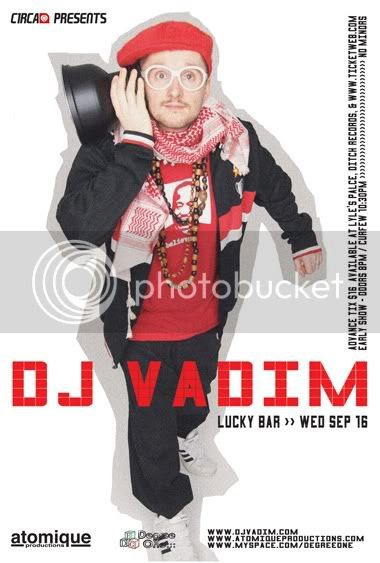 DJ Vadim
Hardest working man in show business? Trouper? Tireless? The John Coltrane of hip hop. However you want to put it, be sure of one thing, when DJ Vadim first heard the phrase "Don’t sleep” he obviously took it literally.
Founder of the label Jazz Fudge(1994), A&R, record collector, and in-house producer of Latin Grammy nominees,7 Notas 7 Colorez/ mucho muchacho, Vadim has certainly been keeping himself busy. And that’s before we even mention his DJing which has seen him tour, all over the world with the likes of Atmosphere, PE, Ghostface killah, Method Man, Redman, STS9, Kraftwerk,Fat Freddys Drop, Roni SIze... Playing at some of the worlds biggest most prestigious festivals like Glastonbury, Fuji rock , Roskilde, Exit, Big Chill, Burning Man..... Add to this his countless remixes from the like of Stevie Wonder, Al Green. Prince, The Cure, DJ Krush, Morcheeba, Talib Kweli, Gus Gus... and mix cd’s - ‘architects of the great’(97),‘lettuce proppelled rockets’(05), ‘ live in brooklyn’(07). Though maybe described by some as an ‘underground artist’, Vadim has caught the attention of the corporate world too, producing music for Absolut vodka, Nokia, Sin city and MTV.... To describe the man as an musicholic almost seems to sell him short.
The story begins in 1992. Vadim bought a sampler and started working on the music that would become Abstract hallucinating Gases and Headz ain't ready(95). His first 2 releases. Later in the year he signed to Ninja Tune which culminated in his debut LP USSR Repertoire(1996) From these early recordings came a remix LP USSR Reconstruction(1997). In 1999 came the collaboration LP of The Isolationist produced by vadim, and vocalised by anti pop consortium.

Controvesy struck with the album USSR: Life from the other side (1999). The LP featured Co Flow, Iriscience(from dilated peoples) amongst others and caused quite a storm in USA with the track ‘your revolution’ featuring Def Jam poetess Sarah Jones. This song was banned by the FCC in the USA for explicit and provocative lyrics. The album also featured the underground classic “the terroist’ which was also banned.

To promote that LP, Vadim put together - The Russian Percussion - consisting of Mr thing(turntables), killer kela(beat box), Blu rum 13(mc), John Ellis(Keyboards - Cinematic Ochestra) and Yarah Bravo. This was to become the catalyst and inspiration for future work to come(one self).

"…Listening” has all of the angular abstractions of Vadim’s earlier work, but here it is combined with a new depth of musicality, a love of bass and an interest in music and words from around the world. So, alongside UK MCs like Taskforce and Phi Life Cipher and the cream of US underground wordspitters like Slug, Gift of Gab, Moshun Man and Vakill can be found Polish jazz legend Urzula Dudziak, Super Furry Animals, and Brazilian Swedish mistress of poetic innovation Yarah Bravo.

ONE SELF - children of possibility(2005)

After the success of the russian percussion tours, it was only natural to create an album with cohorts Yarah Bravo and Blu rum 13.Organic hip hop soul. ‘Cosmopolitan, diverse, colourful, real, loud and definitely not middle of the road’ - the source THe album featured two of the most popular Vadim produced tracks to date - ‘Be your Own’, ‘Bluebird’. Both heavily supported by radio.

Not content with working harder than all 7 dwarfs put together, he transplanted himself and his 'timber yard studio' to Brooklyn New York in early 2006 where most of the latest LP was written and produced. Unpredictable with touches of disco and tubby-esque dub moments, varied with brushes of soul, hip hop and downtempo. The album featured the underground soul classic - ‘Black is the night’ featuring Kathrin de Boer.

Improving with age is not limited to fine wine. The latest instalment is proof that things seem to just keep sounding better and better. For an artist with such a long recording pedigree it would be easy to sit in cruise control, re hash earlier ideas... This however isn’t Vadim. The latest offering is more electronic than previous, more defined, refined but yet retaining its soul boombap prowess.