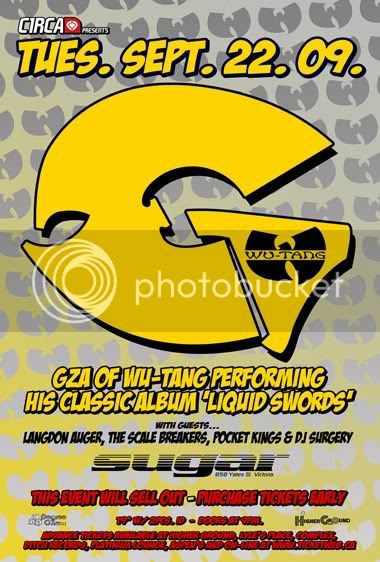 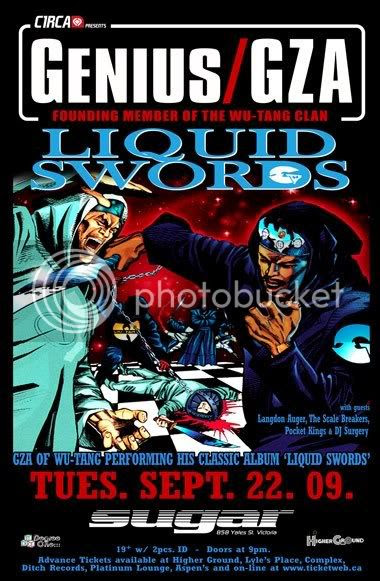 Tuesday, September 22nd 2009.
Sugar Nightclub - 858 Yates St. Victoria.
GZA:
True genius cannot be rushed. In the case of the legendary lyricist GZA, time has always been on his side. With Pro Tools, GZA’s latest release and fifth solo album courtesy of renowned indie Babygrande Records, the masterful MC adds yet another lyrically stunning LP to his rich musical catalogue. For the past 15 years, GZA has been stretching the sensibility of modern-day hip-hop with his finely crafted, thought provoking wordplay which he credits to his willingness to delve deep into the written word.

After moving from Brooklyn to Staten Island around the age of 9, GZA developed an interest in hip-hop by attending block parties as a child in the late '70's. He formed a three-man group with his cousins, who would later be known as RZA and Ol' Dirty Bastard. The group, All in Together Now, saw the three rapping and DJing, switching off names and performing local shows; since they lived in different boroughs, RZA and Dirty would travel out to Staten Island to meet up with their cousin, after which the three would travel across NYC and challenge other MCs to battles. After some years of this, GZA was signed to Cold Chillin' Records as a solo artist under the name The Genius. He put together an album called Words from the Genius, produced mostly by Easy Mo Bee, but after it failed to sell well--and his rocky experience on tour--GZA became fed up and asked for release from the label.

After joining the Wu-Tang Clan, a group of nine which included himself, RZA and ODB, GZA boasted some high-profile appearances on the group's debut album, Enter the Wu-Tang: 36 Chambers, including a solo track, "Clan in da Front." This was followed up in 1995 with GZA's sophomore solo effort, Liquid Swords, produced entirely by RZA; the album was met with critical and commercial acclaim, and is still considered one of the best albums to come out of the Wu-Tang camp; in 1998, the album was selected as one of The Source Magazine's 100 Best Rap Albums of all time.

After appearing on the Wu-Tang Clan's second album, Wu-Tang Forever, GZA released Beneath the Surface in 1999. Reviews were mostly positive, though it failed to live up to Liquid Swords' acclaim or commercial success. Like the sophomore projects of many Clan members, critics decried the album's lack of RZA production, claiming the underground producers and Wu-Elements used did not live up to the producer's skill level. GZA put in appearances on The W, Iron Flag and some of his group members' solo projects, but did not release another of his own until 2002 with Legend of the Liquid Sword. The album was received well by critics, but did not achieve commercial success, failing to go gold as his previous release had. GZA spent 2004 touring, both solo and with the Clan, and made an appearance with RZA in Jim Jarmusch's film Coffee & Cigarettes, opposite Bill Murray.

In 2005, GZA and DJ Muggs (the producer for Cypress Hill) released the LP Grandmasters. Muggs provided all the beats for the album, which saw GZA using chess as a metaphor for the rap game. The album received very positive reviews and modest commercial success. He then partook in the recording of groupmate Raekwon's Only Built 4 Cuban Linx II.

2007 saw GZA teaming up with his Wu-Tang Clan to record the group album 8 Diagrams, and in the ensuing controversy, defended both Raekwon and Ghostface Killah's rights to speak their mind, and RZA's production job on the album. In the summer of 2008, he released the album Pro Tools which featured production from Black Milk and past collaborators Jay "Waxxx" Garfield, RZA, Mathematics and True Master. Throughout the years GZA has maintained a reputation as a skilled wordsmith with a highly recognizable and authoritative delivery.