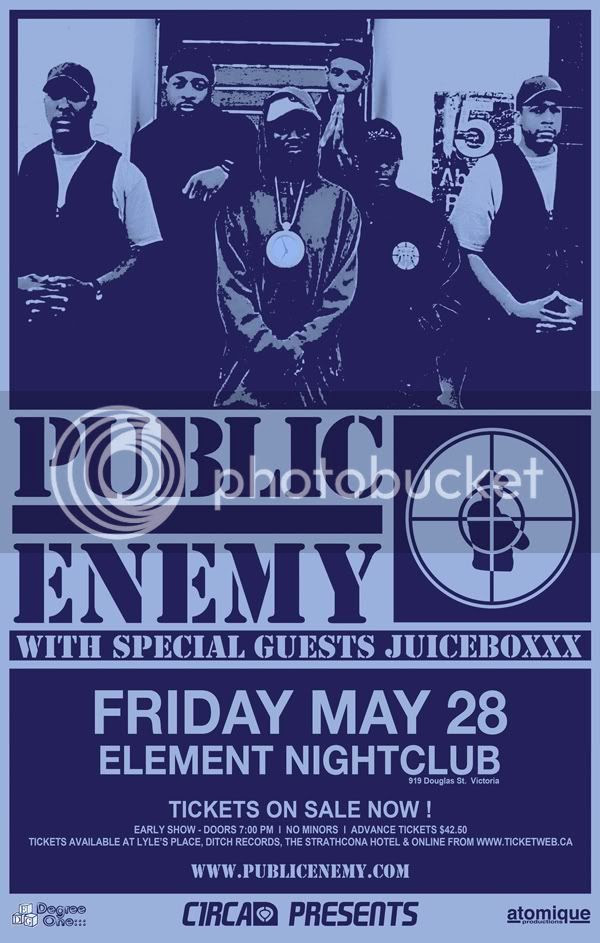 Degree One and Atomique Productions are proud to present the return of the biggest hip hop/rap group in history.....
PUBLIC ENEMY
w/ special guests Juiceboxxx
The show will feature all members of the group including Chuck D, Flavor Flav, Professor Griff, the S1Ws and DJ Lord!
Friday, May 28th 2010.
at Element Nightclub - 919 Douglas St. Victoria.
~~~~~  ~~~~~  ~~~~~  ~~~~~
Public Enemy transcends the confines of rap and pop music, remaining one of the African American community’s most important messengers, digital music’s greatest champions, and a rare rap group who need not rely on misogynistic and pro-violent lyrics. The group burst onto both the rap and pop music world in 1987 with their first single, “Public Enemy #1,” a startling combination of Chuck D’s commanding orations, Hank Shocklee’s layered cacophony of musical noise, and Flavor Flav’s show-stopping antics to keep the message entertaining. The song is not only known for introducing a whole new sound to the rap genre, but for giving the group their name.
Public Enemy rewrote the rules of hip-hop, becoming the most influential and controversial rap group of the late '80s and, for many, the definitive rap group of all time. Building from Run-D.M.C.'s street-oriented beats and Boogie Down Productions' proto-gangsta rhyming, Public Enemy pioneered a variation of hardcore rap that was musically and politically revolutionary. With his powerful, authoritative baritone, lead rapper Chuck D rhymed about all kinds of social problems, particularly those plaguing the black community, often condoning revolutionary tactics and social activism. In the process, he directed hip-hop toward an explicitly self-aware, pro-black consciousness that became the culture's signature throughout the next decade. Musically, Public Enemy were just as revolutionary, as their production team, the Bomb Squad, created dense soundscapes that relied on avant-garde cut-and-paste techniques, unrecognizable samples, piercing sirens, relentless beats, and deep funk. It was chaotic and invigorating music, made all the more intoxicating by Chuck D's forceful vocals and the absurdist raps of his comic foil Flavor Flav. With his comic sunglasses and an oversized clock hanging from his neck, Flav became the group's visual focal point, but he never obscured the music. While rap and rock critics embraced the group's late-'80s and early-'90s records, Public Enemy frequently ran into controversy with their militant stance and lyrics, especially after their 1988 album, It Takes a Nation of Millions to Hold Us Back, made them into celebrities. After all the controversy settled in the early '90s, once the group entered a hiatus, it became clear that Public Enemy were the most influential and radical band of their time.
Tickets ON SALE NOW:
$42.50 Advance - Available at Lyle's Place, Ditch Records, The Strathcona Hotel, and http://www.ticketweb.ca/
Extra Info:
http://www.publicenemy.com
http://tinyurl.com/3act52j
No Minors. 2 Pieces of ID Required.
Early Show: Doors 7pm / Curfew 10:30pm