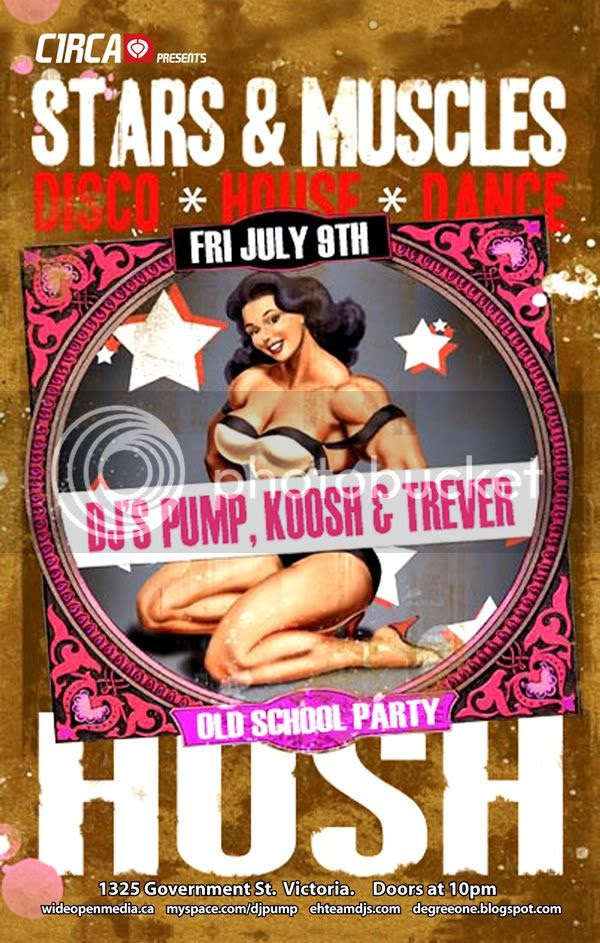 C1RCA, Degree One & Wide Open Media present a show of spectacular proportions!!!
STARS & MUSCLES
~ Old School Party ~
What would you get if blood, sweat and steroids, had a baby with a beauty pageant? What happens when funky meets sexy? Or if Soul Train crashed into Knight Rider while the Dallas Cowboy's cheerleaders mudwrestled Vanity 6? What if this all happened at the same time?
Eh! Team DJ's Calgary representative DJ Pump gets together with local heros Koosh and Trever to search for answers to all these questions and more on the dancefloor at the Old School Party called STARS & MUSCLES.
Come down and jam with these macho men as they give you the goods right where it counts. You know the drill: strictly Boogie-Funk to Disco, Italo, 80's, Classic House to Dance Music and all that good stuff. It really doesn't get any better than that, we keeps it Funky.
Friday July 9th at Hush - 1325 Government St.  Victoria.
Doors at 10pm. 19+ w/ 2pcs. ID
Discount with your SOUNDWAVE BRACELET!! (being worn)
Gonna be a party, so see you then, 'cause Stars are forever, and Muscles are for fun.  ***B.Y.O.S.
*** (Bring Your Own Sweat)
----- ----- ----- -----

In a world full of run of the mill DJs, Pump stands out as being extremely talented and unique. Pumps abilities are surpassed by few, while his diversity stretches the boundaries of Turntablism and what it means to be a DJ. While theoretically speaking, there should be no boundaries between a Turntablist and being a DJ, many Turntablists isolate themselves into the monotony of doing three-minute routines, while forgetting the basic elements of DJing, rocking a party and mixing records. When scratching, creating beat juggles or blending beats, Pump focuses on the overall musical composition and the sound of the end result. His performances have earned him the respect amongst his peers as one of the funkiest DJ's around, as well as one of Canada's best kept secrets.

Throughout his career Pump has received many notable awards and accolades, headlined some of the most exciting club nights around the globe and showcased alongside a myriad of elite DJ's. In 2000 Pump won BOTH the Canadian ITF and DMC DJ Championships and went on to represent Canada at The DMC World Championships at London's Millennium Dome. Fast forward 10 years and the man is rockin' harder than ever... travellin' Canada coast to coast as a handpicked member of Team Canada's DJ Squad... The Eh! Team DJ's.

The brash DJ Pump, who ignited a city and a country back in 2000, is most comfortable when he's rocking the crowd with his unique blend of funk, soul, old school, disco and everything in-between using his unbounded DJing skills and talents. His no-gimmick style of skilled accuracy coupled with a distinct ear for all things funky makes him one of the nations most versatile vinyl violators. Its this balance and diversity which basically encompasses his entire being, the balance of musical value and technical skill, the balance of commercial success and underground credibility and the balance of b-boy cockiness and soft spoken humbleness.