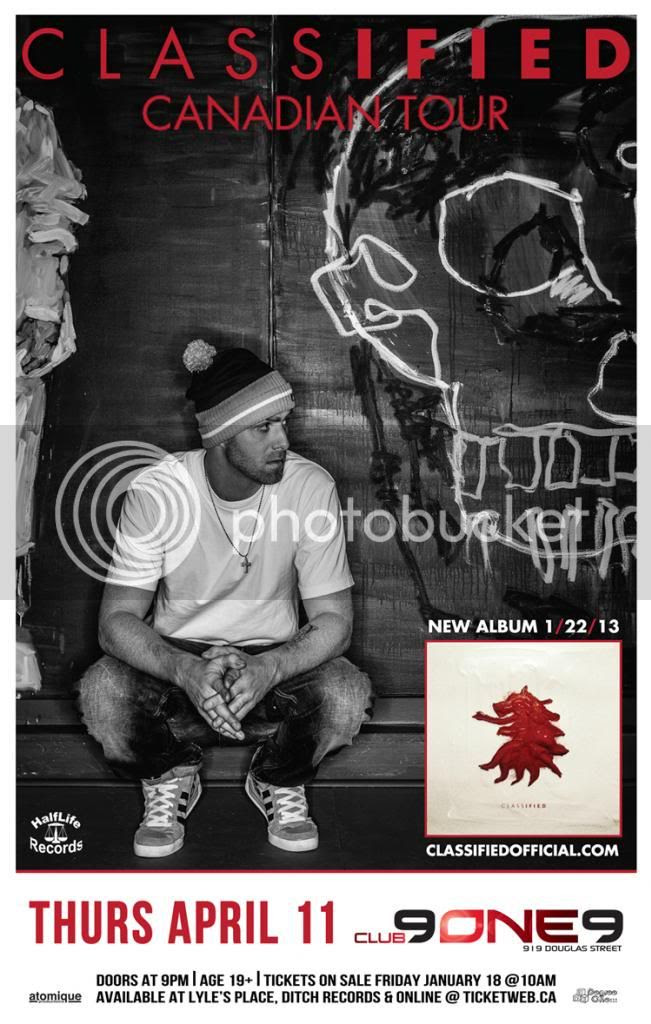 Doors at 9pm.
No Minors. 2 Pieces Of ID Required.

Classified is the Canadian MC from Enfleld, Nova Scotia, who has not only remained current, but improved with each disc. Revered and respected, the rapper-producer has taken Canadian hip hop music all over the world, all the while deepening his word play and sharpening his beats. Now, returning with his new, first-ever self-titled album on Half Life Records/Universal Music Canada, Classified presents the apex of his trials and tribulations of a lifetime spent in the studio, and on the road.

“I try and write as if you’re sitting in a room with me and we’re having a conversation,” Classified says. “I never got into this to be famous, but to get my point across, be honest and make real music.”

The secret to the success of Classified, a musician whose admirers include everyone from Jim Cuddy to Jay-Z, is how he's broken down the barrier between the performer and the man. Approachable on-line and at venues – the new record features Wicked, a track he recorded with 22 fans – Classified, who was born Luke Boyd, says he doesn’t have to pretend on his records to attract attention.

“I’m always the same – whether I’m hanging out with my grandmother or rocking the stage,” he says. “I’ve become more comfortable with myself and each record’s been an evolution to where we’re at now: when Classified’s caught up with Luke Boyd.”

The new album arrives at the very top of the musician’s creative and commercial peak. After selling 100,000 records, gaining multiple Juno Award nominations and reaching his highest chart position on 2011’s Handshakes and Middle Fingers, Classified’s riding his career-best momentum across the twelve tracks of his new disc. Like life, the songs oscillate between heavy and light, suffering and celebration, and, on the tune Growing Pains, Classified addresses the hypocrisy involved with raising his two daughters while living the hip hop lifestyle.

“I want to keep everything with my daughters as real as possible,” he says. “I want my kids to know: You’re going to get your heartbroken, but you’re going to be able to get through it. That’s the message of all my music – enduring through the hardships of life.”

Inner Ninja, the album’s blazing, uplifting first single, is already a hit with radio programmers and repeats its message over dirty drums and a David Myles chorus, while New School, Old School, represents his place in the pantheon of hip hop: someone who's gone toe-to-toe with everyone from Maestro and Drake. Taken together, it’s the work of an artist in his prime.

“With every album, I get better at what I do,” says Classified, who, even though he’s now signed to Canada’s largest label, home to Justin Bieber, Nelly Furtado and Drake, still recorded the new album at the studio behind his home, 15 minutes from where he was born. “I constantly try to refine myself, find new things to value, and give listeners more direction to where I’m going, but make damned sure they have a good time as they come along with me for the ride.”
The ride Classified creates on the new album has grown deeper, harder, more musical and complex. After experimenting with instruments on 2009's Self-Explanatory, the producer’s crafted his aural landscapes with a deftness that hasn’t been there before. He’s dabbled with orchestras, horns and gospel arrangements, but these components transform the new disc.

“Musically, it’s like I’m not writing the play while we’re going about scoring, instead I’ve read the play book and can see the goal line before the play even unfolds,” says Classified, a perfectionist in the studio, who can record take after take of each tune until, as he says: “I want to shoot myself in the head.”

“Rap, to me, is not about money, it’s about working your ass off,” he says. “I keep growing and I’ve been lucky, but I’ve worked damn hard to get to this spot.”

Classified’s spot is singular, esteemed and, with his new self-titled record, sure to expand on the foundation he’s laid after working so hard to bring Canadian hip hop all over the world. For Classified, music is about speaking directly to listeners, a gig he’s been perfecting since he was 15-years-old.

“My dad was in a cover band and there used to be amps in the basement and after his practice, I'd plug his mics into the system and pretend I was in Naughty by Nature,” he says. “Today, it’s no different. The studio’s nicer, the gear's more impressive, but it’s the same: Go in the studio as a regular person, and hit record.”