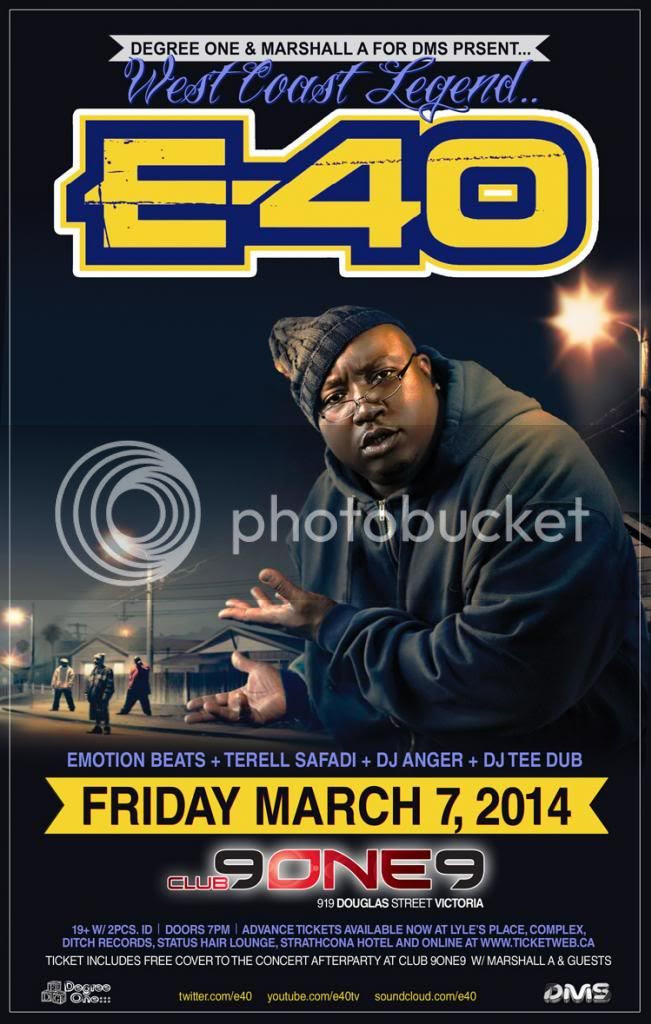 Degree One and Marshall A for DMS present...

West Coast Rap Legend live in concert for the first time ever on Vancouver Island.

Get your tickets before they sell out.!

Tickets include FREE COVER to the afterparty immediately following the concert at Club9ONE9 featuring Marshall A and guests.

Synonymous with West Coast and Bay Area rap, E-40 garnered a huge following with his flamboyant raps, while his entrepreneurial spirit, embodied by his homegrown record label, Sick Wid' It Records, did much to cultivate a flourishing rap scene to the east of San Francisco Bay, in communities such as Oakland and his native Vallejo. Along with Too Short, Spice 1, and Ant Banks, E-40 was among the first Bay Area rappers to sign to a major label, penning a deal with Jive Records in 1994. They'd spent years releasing music independently, going back as far as 1990 when Sick wid' It released Let's Side, a four-track EP by the Click, a group comprised of E-40, his cousin B-Legit, his brother D-Shot, and his sister Suga T. Throughout the '90s and into the early 2000s, E-40 and his Sick wid' It associates released a series of albums on Jive,' In a Major Way' proved E-40's breakthrough; featuring a collaboration with fellow Bay Area hardcore rappers 2Pac, Mac Mall, and Spice 1, "Dusted 'n' Disgusted," in addition to several songs that would also become fan favorites ("Da Bumble," "Sideways," "Sprinkle Me," "1-Luv"), the album was very well received regionally and took the rapper's career to a new level of respectability. These records proved highly influential, not only on the West Coast but also in the South, thanks in part to Master P, who began his No Limit Records empire in the Bay Area, in the early to mid-'90s before relocating to New Orleans. E-40's ties to the South became more direct in the mid-2000s, when, upon the expiration of his deal with Jive, he partnered with Atlanta rapper/producer Lil Jon and his BME Recordings label. The first album to be released as part of this partnership, My Ghetto Report Card was E-40's most successful in years. He rose to even higher mainstream popularity with the single "Tell Me When to Go" which was produced by Lil Jon. Concurrently, the Bay Area rap scene, with its so-called hyphy style, was growing in popularity nationally, and there was no bigger champion of the Bay and its style than E-40, whose innumerable guest features helped foster the scene and whose son, producer Droop-E, had grown to become one of hyphy's foremost practitioners.

In 2012, E-40 released three solo albums: The Block Brochure: Welcome to the Soil series 1, 2, and 3, and will release a collaboration album with Too Short. The first single from the second Block Brochure album is "Function" featuring YG, Iamsu! & Problem. It peaked at #21 on the Bubbling Under Hot 100 Singles chart, #62 on the Hot R&B/Hip-Hop Songs chart, and #22 on the Rap Songs chart, becoming his most successful single in years. The volumes include Juicy J, 2 Chainz, Tech N9ne, Snoop Dogg, Twista, Kendrick Lamar, Too Short, Brotha Lynch, Andre Nickatina, & T-Pain as guests. They each debuted at #'s 58, 59 & 72 on the Billboard 200, respectively, and the triple album box set that contains all three Block Brochure volumes debuted at #44. He made a cameo appearance in the music video for Young Jeezy's song "R.I.P." feat 2 Chainz in March 2013, and was also featured on the song's official "G-Mix" also featuring Snoop Dogg and Too Short. It was revealed that the 4th, 5th and 6th editions of The Block Brochure would be released exactly one year after the release date of the first three volumes. However, there is no confirmed release date for the three albums, but the artwork for all three volumes and the triple album box set was released on June 12. On May 21, he released the first single from the three albums, "Ripped" featuring Lil Jon. On July 18, he premiered the second single "All My Niggaz" featuring Danny Brown and Schoolboy Q. The song was released to iTunes on August 20, 2013. On August 26, the video for "Off the Block" featuring Stressmatic and J. Banks was released and confirmed to be on the album.

With millions of records sold, countless sold out shows, loved by both the streets and respected amongst his peers, without question E-40 continues to reign supreme. Empowering a familiar cliché that states, “If it’s not broke, don’t fix it."