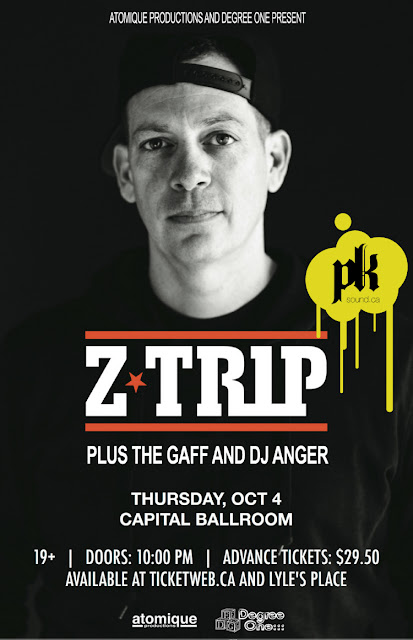 Atomique Productions and Degree One present...
Z-TRIP
plus The GAFF and DJ Anger
***WITH CUSTOM FULL PK SOUND SYSTEM***

Facebook Event Page: https://www.facebook.com/events/655958611429066/
------     ------     ------DJ Z Trip - "Crate Diggers" - www.youtube.com/watch?v=E0NFcxjU-kU&t=26sZ-Trip is often referred to as a young Rick Rubin. His roots are based in Hip Hop, but he covers and loves all music styles. Considered by many as the godfather of mash-ups, his style of mixing and producing reaches way beyond that. Z-Trip received the award for America’s Best DJ and still remains on the top 10 lists year after year. He has collaborated with some of the very best to ever do it: Nas, Bassnectar, Public Enemy, DJ Shadow, Rakim, Shepard Fairey, Talib Kweli and many others.As a performer, Z-Trip is one of the very few able to play traditional festivals like Coachella, Lollapalooza, Bonnaroo, SXSW and Australia’s Big Day Out, as well as the EDM circuit. His Electric Daisy Carnival and Electric Zoo sets were both festival highlights.Z-Trip’s artist debut album “Shifting Gears” received 4 stars in Rolling Stone. His subsequent releases were also given high praise. As a producer & composer, he’s worked on many video game sountracks including the EA Sports “Madden” series, 2K Sports “All Pro” and Activision’s “DJ Hero” series. He is also a featured avatar in the game alongside Daft Punk, Tiesto, Grandmaster Flash and Deadmau5.Z-Trip also remixed tracks for Nirvana, The Beastie Boys, Dead Weather and The Jackson 5 to name a few. Most recently, he collaborated with Lee Scratch Perry to rework Bob Marley’s classic “Punky Reggae Party” and with Brillz for Jay Z’s hit “Dirt Off Your Shoulder”.No stranger to TV, Z-Trip performed alongside LL Cool J, Chuck D, Tom Morello and Travis Barker closing out the 2013 Grammy Awards. He has also appeared on Jimmy Fallon, Carson Daly and Jimmy Kimmel Live.Z-Trip’s work with film is equally diverse, having scored music for the documentaries “Infamy”, “Scratch All The Way Live” and “Bob Marley: Legend remixed”. His music and scoring have also been featured in the movies “Battle of the Year”, “Warrior” and “Small Soldiers”. Most recently Z-Trip was the music supervisor and composer on the Documentary “La Bare” directed by Joe Manganiello.www.djztrip.com/    www.twitter.com/ztrip    www.instagram.com/z_trip/

Just as KRS ONE once said I am the manifestation of study, not the manifestation of money, same thing rings true of DJ Anger. This self taught turntable virtuoso, devoted business man and music aficionado, has vastly spread his influnces as one of the most solid DJs and Party Rockers on the West Coast.