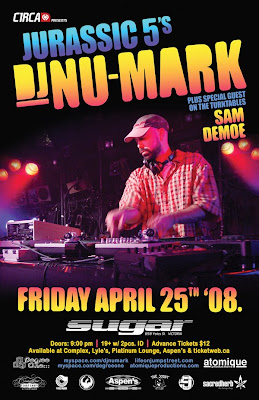 C1RCA, Degree One and Atomique Present...
DJ NU-MARK of JURASSIC 5
plus Sam Demoe and Guests.

For well over ten years, DJ Nu-Mark has been among Hip-Hop’s most respected DJs and producers. Recognized for his membership in the gold selling group Jurassic 5, Nu-Mark is best known for his production on the raw anthem “What’s Golden” and the smooth and soulful “Work It Out,” featuring Dave Matthews. Additionally, his innovative DJ routines and creative on-stage antics have made him a favorite of crowds all over the world.

Perhaps best known for their thrilling stage show, Jurassic 5 has toured the globe several times over, and have made numerous television appearances. With Jurassic 5, Nu-Mark has performed at many of the world’s most important and exciting music festivals – Coachella, Bonnaroo, Lollapalooza 2003, Australia’s Big Day Out, The UK’s Reading Festival, and Japan’s Summer Sonic – where his mastery of a complex, six-piece DJ rig and his playful incorporation of children’s musical toys have amazed and delighted crowds of up to 50,000 fans. Jurassic 5 has appeared alongside many of music’s greats, including A Tribe Called Quest, the Wu-Tang Clan, Outkast, The Roots, Run DMC, Green Day, and even Bruce Springsteen.

Nu-Mark is responsible for half of the production of Jurassic 5’s entire body of work: Jurassic 5 EP (1997), Quality Control (2000), Power In Numbers (2002), and Feedback (2006). He has also released his own projects, independent of the group: Blend Crafters, an instrumental album created in the spirit of allowing beats to speak for themselves, and 'Hands On', a Mix-CD that assembles a diverse and eclectic set of sounds, everything from soulful breaks to comedic skits, as well as classic underground jams. It also includes a special section devoted to hip-hop from around the world. By turns hilarious and impressive, this project displays both Nu-Mark’s eccentric sense of humor and his devotion to solid, simply dope music. Currently, Nu-Mark is placing his beats on a number of projects in a variety of genres.

Nu-Mark began DJing as a teenager in Los Angeles. Over the course of the last two decades, he has amassed a collection of over 35,000 records and refined his technical skills and performance style to the point where he is widely recognized as one of the key figures in the late-90s DJ explosion which pushed the DJ to the front of the culture’s awareness. As a result of this distinction, Nu-Mark has been featured in a diversity of publications and in several films: the critically acclaimed documentary “Scratch”, “KeepinTime” (which features impromptu collaborations with Mad Lib, Cut-Chemist, Babu, J-Rocc, and drummers James Gatson and Paul Humphrey), “Coachella: The Movie,” and “Rock the Bells – The Documentary.”

Today, Nu-Mark is well-known for his innovative plays on sound – attaching a rubber band to his turntable’s needle and playing it like an upright bass or tapping on the turntable’s dust cover to simulate a bass drum. Incorporating a wide range of musical styles – soul, funk, hip-hop, and samba effortlessly blended together. Nu-Mark revels in surprising an audience with a forgotten gem, an unknown banger, or a fresh take on a well-known hit. From Sao Paolo to Sydney, from Toronto to Tokyo, Nu-Mark’s carefully crafted, explosively energetic DJ sets never fail to get a party rocking.