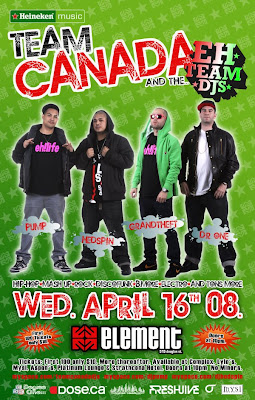 Heineken Music along with Degree One present...
BACK BY POPULAR DEMAND....
CANADA'S UNDISPUTED PARTY ROCKIN' KINGS....
TEAM CANADA DJ'S
(( D.R. ONE & GRANDTHEFT ))
with EH! TEAM DJ'S
(( PUMP & HEDSPIN ))
ONE NIGHT ONLY.... WEDNESDAY APRIL 16 2008.
Element Nightclub - 919 Douglas St. Victoria, BC
Doors open at 10pm
19 and Over. 2 Pieces of ID Required.
Tickets: First 100 ONLY $10. Thereafter $15.
Available NOW at Complex, Lyle's Place, Mysi, Aspen's, Platinum Lounge and The Strathcona Hotel.
Rockin' on 4 Turntables at once these cats will be droppin' all your favorite Hip Hop, Mash-Up, Rock, Discofunk, Electro, B.more, 80's, 90's and tons MORE.
Expect the freshest Mash-Ups and Remixes served up with tightest DJ Skillz.... Bring Yo Boogie Shoes !!
TEAM CANADA DJ'S: Montreal, QC.
Originally a battle DJ, D.R.one linked with producer DJ Grandtheft in Montreal. Realizing they had a creative style of club DJing in common, the duo began throwing fun parties all over the east coast. Eventually they formed the Team Canada DJ Crew in late 2004 and released their all-remix white label debut "Classic Material Volume 1". Team Canada have quickly established themselves as Canada’s top club remixers and party DJs. Blazing some of the hottest clubs worldwide with a unique mix of music, they have made their mark with a four turntable party set. People who have ever been to a Team Canada party, know that you leave having partied hard, cheered hard, and danced to music you never imagined mixed together in the same night.
Team Canada has recently signed with DJ AM’s management team in LA joining a strong team of AM, A-Trak, Steve Aoki, Eli Escobar, Stretch Armstrong, DJ Spider, DJ Fashen, Kevin Scott, DJ Scene and Pase Rock.
Team Canada has just signed 4 top DJs in Canada including Jr. Flo (Toronto) Illo (Ottawa) Pump (Calgary) and Hedspin (Vancouver), forming their own crew/management agency... 'The Eh! Team'.
DJ PUMP: Calgary, AB.
The brash DJ Pump, who ignited a city and a country back in 2000, is most comfortable when he's rocking the crowd with his unique blend of hip hop, funk, soul, old school, disco and everything in-between using his unbounded DJing skills and talents. His no-gimmick style of skilled accuracy coupled with a distinct ear for all things funky makes him one of the nations most versatile vinyl violators. Its this balance and diversity which basically encompasses his entire being, the balance of musical value and technical skill, the balance of commercial success and underground credibility and the balance of b-boy cockiness and soft spoken humbleness.
Throughout his career Pump has received many notable awards and accolades, headlined some of the most exciting club nights around the globe and showcased alongside a myriad of hip hops elite such as Afrika Bambataa, Kool Herc, Grand Master Flash, Jazzy Jeff, Questlove, DJ Premier, A Tribe Called Quest, Snoop Dogg, Sean Paul, A-Trak, Q-bert, Rob Swift, Wu-Tang Clan, De La Soul, Beatnuts, Masta Ace, Jurassic 5, Gang Starr and Blackalicious just to name a few. Since then, hes crafted his credentials to include his highly sought-after mixtapes and CDs. This is a testament to Pumps keen ear for music, credibility and branding. One look at his resume and its no wonder why his loyal fan base continues to grow.
HEDSPIN: Vancouver, BC
A proven party rocker blessed with the talent of a top turntablist, one who's down with the classics but up on the hot new shit, Hedspin has wowed crowds in Whistler, Victoria , Seattle , Calgary, Edmonton, Regina, Toronto, Montreal, Japan, Philippines and London. You can find him at his current residencies alongside the city's top promoters: weekly at Get Up, Get Down Fridays at Shine Nightclub (w/DJ Pump) and in rotation at Big Up Saturdays at Plush.
After burning up Vancouver's hip-hop scene over the past 5 years, Hedspin has finally become recognized by his peers and the industry alike being nominated for Clubvibes Vancouver Hip Hop DJ of the Year in 2005 and Stylus Awards Vancouver DJ of the Year and National Club DJ of the Year in 2006. Hedspin also most recently won the 2008 Red Bull 3Style Battle in Vancouver beating many of the city’s top party rockers on the way to the crown.
Artist Info:
http://www.ehteamdjs.com
http://www.myspace.com/teamcanadadjs
http://www.myspace.com/djpump
http://www.myspace.com/djhedspin
Visit our Sponsors:
http://www.dose.ca
http://www.freshjive.com
http://www.orisue.com
Click here for Facebook Event Page
Click here for Dose.ca Event Page