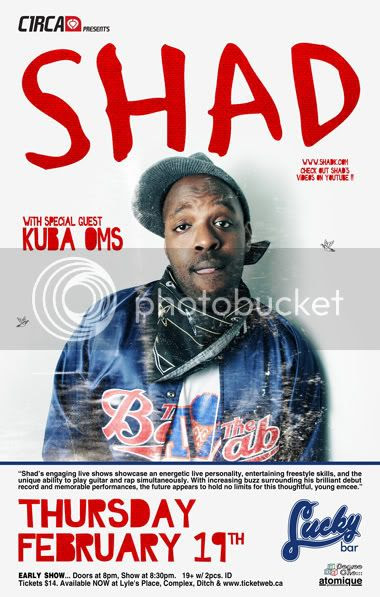 Degree One, Atomique and C1RCA are proud to present....
SHAD
w/ special guest
Kuba Oms.
TICKETS ON SALE NOW!
Ever since Shad opened Classified's Sold-Out show just over a yr. ago at Element here in Victoria with a blazin' performance, tons of people have been asking when he was going return. This show has just been announced and there's already a strong buzz has surrounding the news of his return. This is an awesome opportunity to see a rising star in Canada's hip hop scene in the intimate atmosphere of Lucky Bar as after Victoria he heads out to nearly 3 months of touring N.America. Catch him on his rise to fame...
Here's a lil timeline of SHAD...!!
2004 - Won the solo male category of the "Rhythm of the Future" unsigned talent contest put on by 91.5FM "The Beat" in Kitchener-Waterloo. Winners were awarded a $17,500 recording prize.
2005 - Released debut album, "When This is Over" - funded with the proceeds from the 'Rhythm of the Future' competition.
2006 - Opened for Common, Lupe Fiasco, Del and others, toured nationally, performed at CMW, NXNE, and other festivals.
2007 - Signed with Black Box Recordings/Fontana North. Performed at Hillside Music Festival, Wakestock, S.C.E.N.E., Cutting Edge, LOLA, and others. Released Sophmore album, "The Old Prince".
2008 - Opened sold-out national tour for Classified. Awarded Juno-nomination for 'Rap Recording of the Year' for "The Old Prince". Headlined Skate4Cancer national tour. Short-listed for Polaris Music Prize.
2009 - Shad tours Ontario and BC before hitting The SXSW Festival in Austin, Tx. a Grammy Weekend Industry Showcase in L.A. and then on to 2.5 months on the road all over N. America with The Vans Warped Tour.
Advance Tickets $14 @ Lyle's Place, Ditch and http://www.ticketweb.ca
More Info:
http://www.myspace.com/shad
http://www.myspace.com/kubaoms
No Minors. 2 Pieces of ID.
EARLY SHOW: Doors at 8pm Show at 8:30pm
Posted by Degree One at 4:20 PM