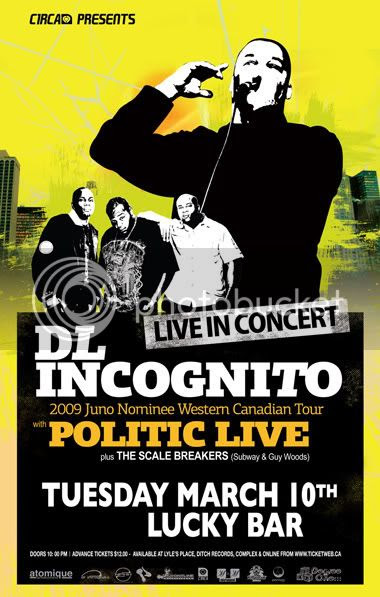 click here to see larger version
C1RCA, Degree One and Atomique Productions Present....
DL INCOGNITO
w/ guests
Politic Live & The Scale Breakers (Subway & Guy Woods).
Tuesday March 10th. 2009
Lucky Bar - 517 Yates St. Victoria
Just announced - DL INCOGNITO has been nominated for the Upcoming 2009 JUNO AWARDS...!
Spreading like a wild fire in the underground, DL Incognito is like a retrospective of hip-hop. Praised by fans and peers alike for keeping that "90's" sound alive, DL's one of the few new school emcee's that keeps it authentic in every sense of the word. Combining old school sampling techniques with new school rhymes, this producer/emcee has crafted a sound enjoyed by many avid hip-hop fans all over the world.

»» His 2002 debut album "A Sample And a Drum Machine" was just a preview of what's to come. Having firmly planted both feet in the music industry with 2 full-length albums plus 2 powerful videos playing on all the major video networks in Canada; DL Incognito, backed by producer Techtwelve as well as Mic Check, has excelled with talent and not payola.

»» DL Incognito is proof that "Real" hip-hop will continue to survive in the ever-changing landscape of rap music. “Hip-Hop’s been dead for years. Witness the resurrection.” – DL Incognito

When DL Incognito’s first record came out in 2002, he was proclaimed as Canada’s best kept urban secret, a newcomer breathing life into a semi-comatose hip hop scene. The album, called A Sample and a Drum Machine, dug deep into the crates to bring the authenticity of old school hip-hop back to the forefront.

Earning his hip hop stripes the old-fashioned way, DL Incognito began his hip hop career in 1998, performing at showcases, rhyming on mixtapes, appearing on radio shows and steadily developing the reputation he has grown to deserve.

Nine years later, and all the buzz about DL being someone to watch out for in the future has been replaced with acclaim for his present accomplishments. A veritable presence in Canadian hip-hop, DL Incognito has succeeded in building on the success of his first album.

DL Incognito released his sophomore album in 2004, called Life’s a Collection of Experiences, which received a 2005 Juno nomination for Best Rap Recording. This nomination served to cement his status as one of Canada’s premier hip hop artists, and was a reflection of a career that had taken him from music showcases, such as NXNE and the CMW to headlining his own shows, opening for major hip hop acts on tour and featuring on several seminal Canadian hip-hop tracks. As an emcee, DL Incognito (which means ‘delivering lyrics on the low’) has been consistently recognized for his lyrical ability and his flow. Music magazine Exclaim! praised his first album, stating that “he [DL] came out of the box slinging similes and metaphors with punch line swagger, dope self-production and a voice reminiscent of the celebrated late MC Big L, earning the respect of those who heard it.”

In 2006 DL Incognito followed up quickly with his third full length recording titled “Organic Music For A Digital World.” The album was also nominated for a Juno in the Best Rap Recording category.

DL Incognito’s appreciation for hip-hop is demonstrated by his dedication to his craft – his music achieves authenticity in a music industry that has become commercialized almost beyond recognition. Known for his live shows where DL delivers “a trip down memory lane, you get beats, rhymes and life. No gimmicks just straight hip-hop.”

DL Incognito’s fourth album, A Captured Moment In Time, was released to rave reviews in 2008 on URBNET Records.