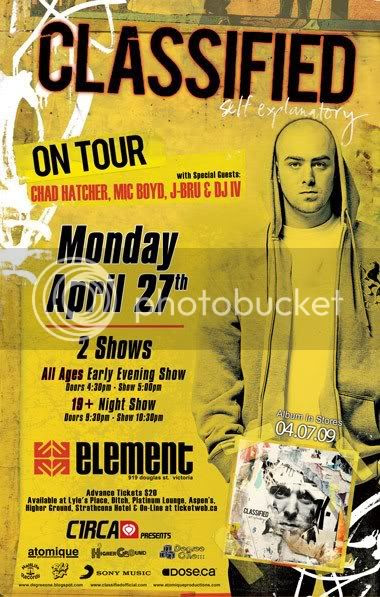 Degree One and Atomique Present...
CLASSIFIED
w/ special guests
Chad Hatcher, Mic Boyd, J-Bru & DJ IV.
Monday April 27th. 2009.
Element - 919 Douglas St. Victoria
>> 2 SHOWS <<
ALL AGES Early Evening Show -- Doors: 4:30 pm - Show: 5:00pm
19 + Night Show -- Doors: 9:30 PM - Show: 10:30pm
--------------------------------------------------------------------------------------
CHOOSE YOUR OWN ADVENTURE…….
April 7th 2009 marks the release of the 11th studio album and major label debut from East-Coast hip-hop heavyweight Classified. Entitled Self- Explanatory, the album contains 22 songs and a unique way of listening to the entire body of work. Throughout Self Explanatory Luke Boyd challenges the listener to create their own adventure as they progress from track to track. Wanna go to the club? Go to Track 17. Tired, wanna go home? Go to track 22. If you want to go for a quick bike ride and a date with your girl, go to track 7 and if you want to reflect on life and re-affirm your inspiration, go to track 6. Each adventure reveals different shades of an artist that has created a unique place for himself in an art form that isn’t always true to its own path.
Adventure 1:
Born in Halifax/Enfield N.S. Classified has defied the odds and found success where others could only hope. Whether signed or unsigned, Classified never abandoned his ethos of working hard and paying ones dues. He has steadily built his career from the independent circuit on up to national prominence, developing into a highly respected MC and desired producer. From his first LP Union Dues in 2001 to the Juno Nominated BOY COTT-IN THE INDUSTRY (2006) and HITCH HIKIN’ MUSIC (2007), Classified has sold well over 40,000 records in Canada alone, and has continuously toured the country coast to coast. Along the way, Classifieds’ humble and creative approach to his music has garnered the attention of some of Hip Hop’s top dogs. HITCH HIKIN’ MUSIC produced by Classified features guest MC collaborations with Tash from Tha Liks and Maestro Fresh Wes. Performances along side Global artist like Nas and The Wu Tang Clan in 2008 set Classified up for his most important adventure yet; Self-Explanatory.
Adventure 2:
Self Explanatory showcases Classifieds many sides; fun and playful at times yet perceptive and insightful at others. Spitting on personal matters (relationships), hip hop issues (past, present and future) and life itself, Class relates with an honesty that truly connects with people. Classified is set to amplify what he has been doing for the past decade by taking his story on a new adventure……connecting to the masses! While the first street track “Trouble” captures that indie ethos that has defined Class throughout the years, it is the first radio single, aptly titled “Anybody Listening” that is destined to take Luke Boyd’s art to the next level. “I wanted to do something up beat and catchy that would stick in people's minds, but at the same time come with some lyrics to see if people are even listening anymore, or are they just wanting that catchy hook? This is the fastest song I have ever rapped on.” says an energized Luke Boyd. “One Track Mind”, a cut penned with celebrated East Coast rocker Joel Plaskett is centered around a Beck-esque piano run that was recorded in Joel’s home studio. “They Call This (Hip Hop)”, is a collaboration with Royce 5’9” and much hyped MC B.O.B from Atlanta, that challenges the assumption that hip hop influences people in a negative way. “Things Are Looking Up”, a further collaboration with Chad Hatcher who Class worked with on HITCH HIKIN’ MUSIC, is based on an old school summer sounding breakbeat that surprises the listener lyrically. “On this one I wanted to come with something a little different then the acoustic sounds you'd be use to hearing from the two of us. I wrote my part to co-inside with what Chad was taking about in the song-that life changes and ya gotta hold on for one more day to see what's gonna happen next! Self Explanatory continues to call-out Canada’s A-list artists with appearances by Choclair, Moka Only, Royce, BOB, Joel Plaskett, Mic Boyd, Chad Hatcher, Saukrates, Shad K, DL Incognito, Buck 65, D-sisive and a few tasty guitar licks, jazzy runs and vocals from Papa Class (Lukes’ Father).
Adventure 3:
Classifieds major label debut with SONY MUSIC is a logical extension to the hard work and endless hours he has invested in his craft to date. “I’m excited about signing with Sony Music and taking what I’ve built to the next level here and around the world.” So, where does Classified go now? What is the next adventure? Canada is a small place in the hip hop world and it’s time for the world to hear what Class has to say. Things get rolling early in 2009 with a date tour with D-12 and Royce starting in Vienna and routing through France, Germany and the UK. Stay tuned for Adventure 4 !!
--------------------------------------------------------------------------------------
Advance Tickets $20 (( ON SALE NOW ))
Available at Lyle's Place, Ditch Records, Higher Ground, Platinum Lounge, Aspen’s, Strathcona Hotel and On-Line at http://www.ticketweb.ca/
http://classifiedofficial.com/
http://www.myspace.com/themicboyd
http://www.myspace.com/jbrumusic
http://www.myspace.com/chadhatcher
http://www.myspace.com/theivleague
Posted by Degree One at 4:20 PM