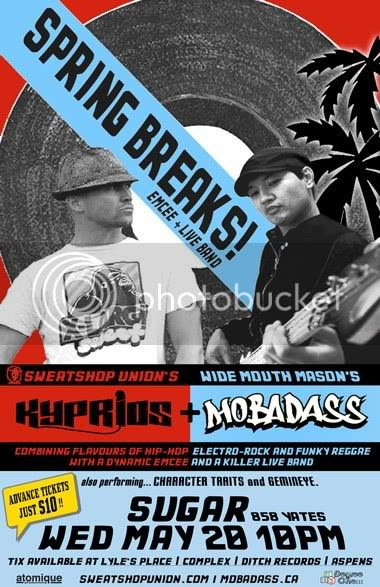 *JUST ADDED:* Character Traits and Gemineye will also be performing.

Kyprios is on a mission to bring Canadian Hip-Hop back to the Nation. From the 2 time Juno nominated group Sweatshop Union, Kyprios is providing hit after hit from his solo album “Say Something”.

Kyprios teamed up with members of Sweatshop Union in 2005 and brought the release of the third Sweatshop Union album, United We Fall. Canada was blanketed, more albums were sold, more audiences were rocked, and more accolades (including nominations for another Juno Award and MuchMusic Video Award) were received.

The release of “Say Something” lead to Kyprios and Sweatshop Union touring North America with Busta Rhymes, Wyclef Jean, De La Soul, The Roots, Living Legends, Ozomatli, Swollen Members and Naughty By Nature. In addition to making hits, he has made ample appearances on TV shows. To add to his high-lights he recently won a Jesse Award, for his music in the play “Cranked”, and continues to be the voice for the legendary Michael Jordon on his “Jumpman 23.com” website.

As a double platinum and 3-time Juno nominee, Mobadass' Earl Pereira became well known in the Canadian music scene for his intensely energetic stage presence and his ability to connect with an audience. Being the bassist and co-founder of one of Canada's best live bands Wide Mouth Mason, Pereira has already had a successful career highlighted by numerous top 20 radio and video hits, touring with the Rolling Stones and ACDC, sharing the stage with Alanis Morrisette, Nickleback, Nelly Furtado, Van Morrisson and selling nearly 250,000 albums over an 6 year span. From childhood entertainer, to nationwide rock-star, Earl has always been an extraordinary crowd pleaser. Canadian Musician Magazine named him one of the country's top bass players, however... most people don't know that he is also a remarkable singer, songwriter and producer.