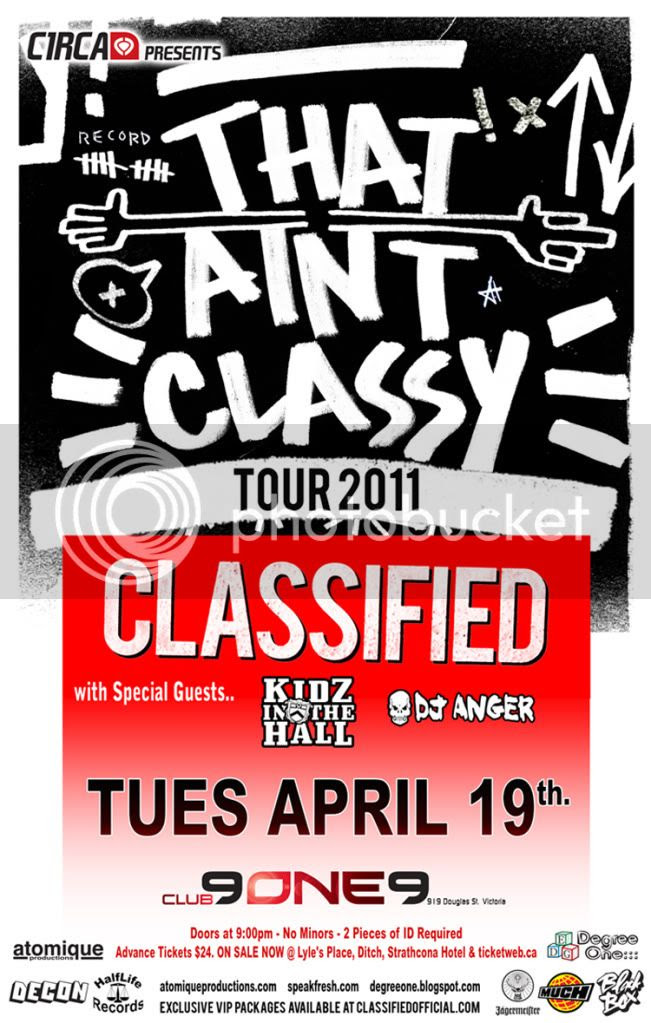 C1RCA, Degree One and Atomique Present....

Two years after Classified electrified fans with his major label debut, Self Explanatory, featuring singles "Trouble", "Anybody Listening" and the platinum selling single and unofficial 2010 Olympic anthem "Oh, Canada", Classified is back with his 12th studio release Hand Shakes and Middle Fingers.

From his first LP Union Dues in 2001, to the JUNO Nominated BOY COTT-IN THE INDUSTRY (2006), HITCH HIKIN' MUSIC (2007) and MuchMusic Video Award winner/JUNO Award nominated Self-Explanatory (2009), Classified has sold well over 65,000 records in Canada alone, and has continuously toured the country coast to coast.

The upcoming Canadian tour is presented by MuchMusic, which has championed Classified's music for years, and the video for the single "That Ain't Classy" (Directed by HARV) will hit MuchMusic's rotation on February 15th. Classified will perform in cities large and small with a massive performance at the Sound Academy in Toronto on March 26th.

Be sure to catch Classified's electrifying live show featuring joints from Hand Shakes and Middle Fingers coming to a city near you!

http://www.myspace.com/kidzinthehall
Posted by Degree One at 4:20 PM