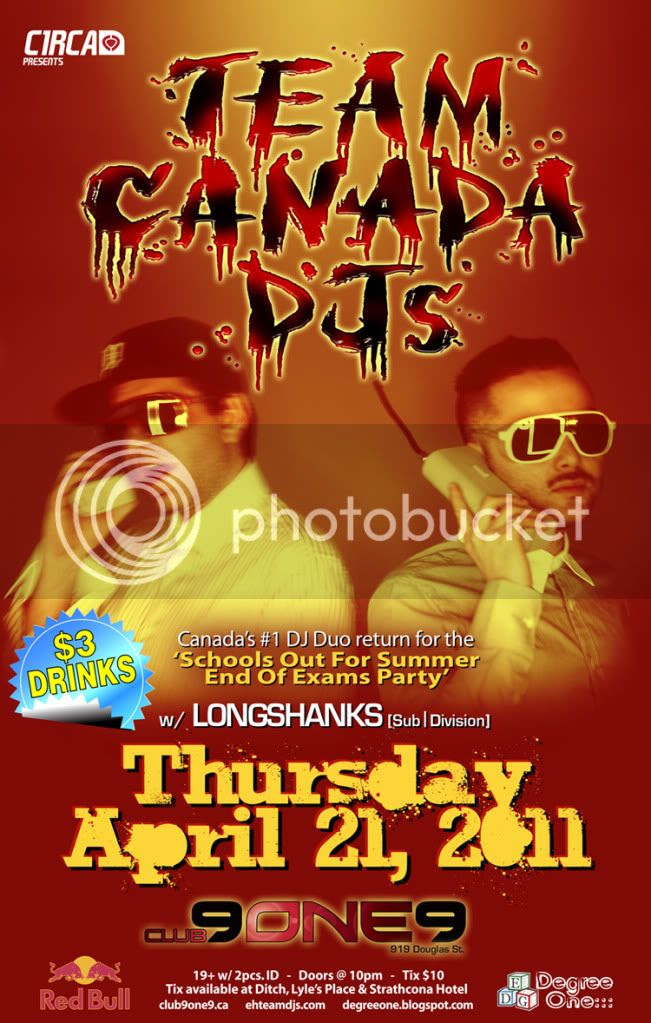 Canada's #1 DJ Duo... Team Canada DJ's make their triumphant return to Victoria to rock the hell outta Club 9ONE9 on April 21st. It's been a minute since the fellas have been in Victoria... and for good reason.. they've been busy ripping up dancefloors all over Canada and appearing at prestigious events in the US and abroad. When they're not throwing down the crazy hype party vibe they also spend time in the lab producing remixes and edits that are always in top rotation w/ the hottest DJ's everywhere.


Originally a battle DJ, D.R.one linked with producer DJ Grandtheft in Montreal. Realizing they had a creative style of club DJing in common, the duo began throwing fun parties all over the east coast. Eventually they formed the Team Canada DJ Crew in 2004 and released their all-remix whitelabel debut "Classic Material Volume 1". Team Canada have quickly established themselves as Canada's top club remixers and party DJs.


Blazing some of the hottest clubs worldwide with a unique mix of music, they have made their mark with a four turntable party set. Anyone who has ever been to a Team Canada party, know that you leave having partied hard, cheered hard, and danced to music you never imagined mixed together in the same night.


In late 2006, the late DJ AM signed TC to his Deckstar team in LA joining AM, Steve Aoki, Jazzy Jeff, Kid Capri, and more. They have since moved on to start their own crew. TC signed 4 top DJs in Canada including Jr. Flo (Toronto) Illo (Ottawa) Pump (Calgary) and Hedspin (Vancouver), forming their own crew/management agency: The Eh! Team.


Alongside one of Victoria's Top Party Rockers...